This classic CheerMAD post, one of our first from the summer of 2011, reminds us that it's not the number following the level of the team, but the number of hearts within it. 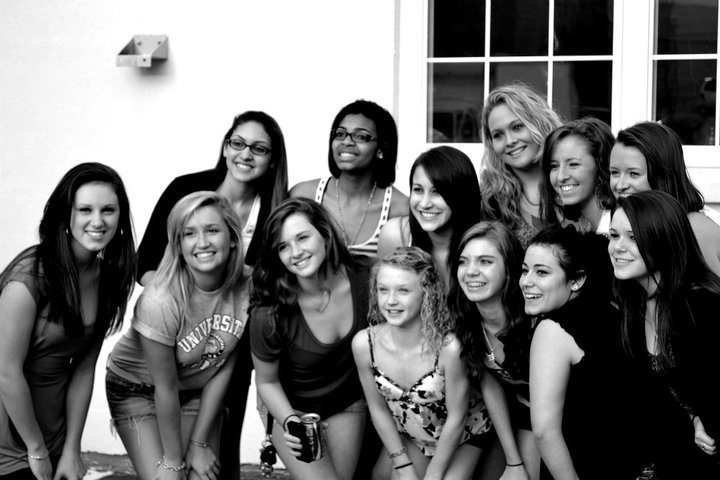 Gorgeous Senior Level 2, The Headliners of ProAthletics 2010-2011, CHEERSPORT Champs
"Please refrain from approaching an athlete if they are with their team" was a comment Tweeted by a coach from a nationally renowned gym at NCA. It could have been The MAJORS, Champions League and of course Worlds which feature the most accomplished Level 5 athletes, and some fans can't help themselves when they see their "idols." We see them on magazine covers and defying gravity at our own gyms. Level 4 and 5 athletes are absolutely breathtaking to watch.
But this Certifiably CHEERMaD blog is for the CHEERMaDs of athletes on Level 2 teams. Those of us who know what it’s like to have a persistent, determined and hardworking child who won’t get the chance to go to Worlds but whose entire world is Allstars. 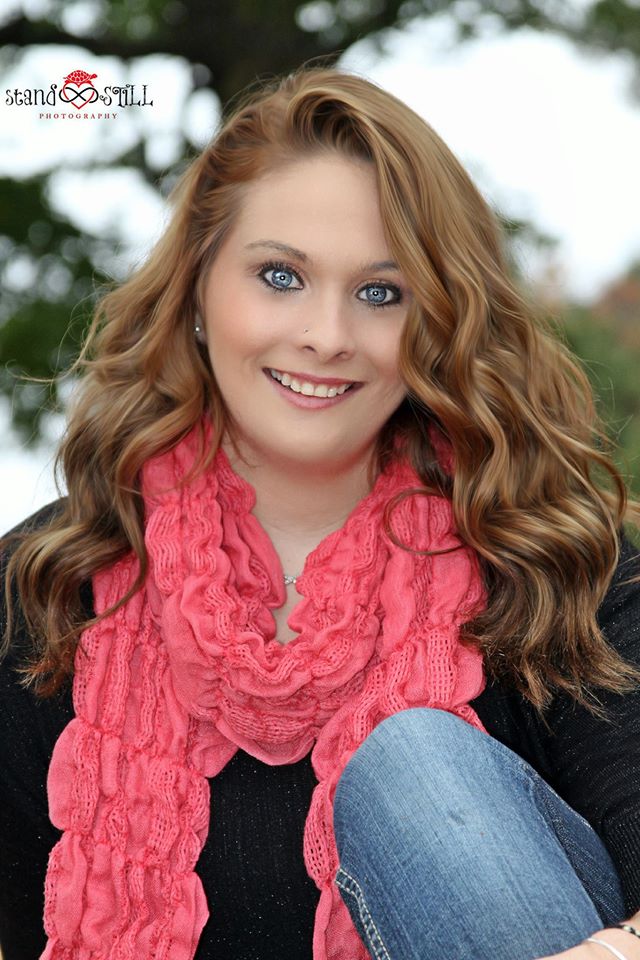 Becky,seen in these photoswas one such Allstar. When she quit softball because it conflicted with her Allstar schedule, her father said I should discourage her, that gymnasts were short for a reason: “Their center of gravity is close to the ground.” And he was a right, with a 6’4” father, 5’6” mom, Becky was the tallest girl in the 5th grade and already taller than the petite tumblers.
All the private tumbling sessions we paid for couldn’t help her get her back-handspring. Year after year, while girls younger than Becky made higher level teams, her frustration was understandable. It didn’t feel fair, but she learned to accept it.
Still, she loved cheerleading. During a very dark phase in her life, the only time I saw her smile was when she was on the mat. It was a place where she could forget her troubles, literally. The gym was a magical refuge where everything else going on in her life was left at the door.
Not only was she against body-type for tumbling, the taller than average adolescent was not conducive to flying either. She wasn’t the point person, wasn’t in the middle of the routine and certainly not the front.
But week after week, she was on time and ready for practice. She was dependable and reliable, the kind of base that would cushion her flyer’s fall with her own body before she’d let her flyer touch a mat. With 100 pounds crashing down on her at full force on top of her head, elbows hitting the side of her face, knees' upwardly hitting her chin, like all bases, Becky took some real hits. We made several trips to the emergency room where doctors' diagnosis was "concussion." Today I know how dangerous that was.
Would she get frustrated? You bet. Whether real or perceived, she felt like Senior Level 4 and 5 athletes thought Level 2s were beneath them, like there was some invisible hierarchy. 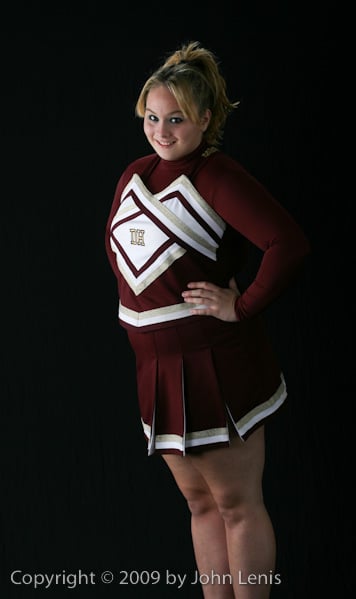 Outside of the gym, many Senior level 2 athletes who weren't "stars" were the best at their high schools where a round-off-back-handspring was an advanced move. In Becky’s case, she was repeatedly recruited by her high school cheerleading squad until she relented. She wasn't accustomed to that kind of attention and certainly not the standing ovation she received when she threw RBHs across the gym floor at the Thanksgiving pep rally.
Her Allstar team was together for two years and at times was its worst enemy. Sidelined by doubts and lack of confidence, the team would beat themselves. The first year at a new gym; the teammates were a mixture of cliques from different high schools and former Allstar gyms, they almost won, weekend after weekend. And even when they gave their best performance of the season, it wasn’t good enough for first place.
It was discouraging to be on Senior Level 2 but 90 percent of the team returned the next year and, while they sensed nothing much was expected of them, they were driven by the need to “show them all.” It helped that their coaches believed in them, even on days when they didn’t believe in themselves.
Until they started to win. 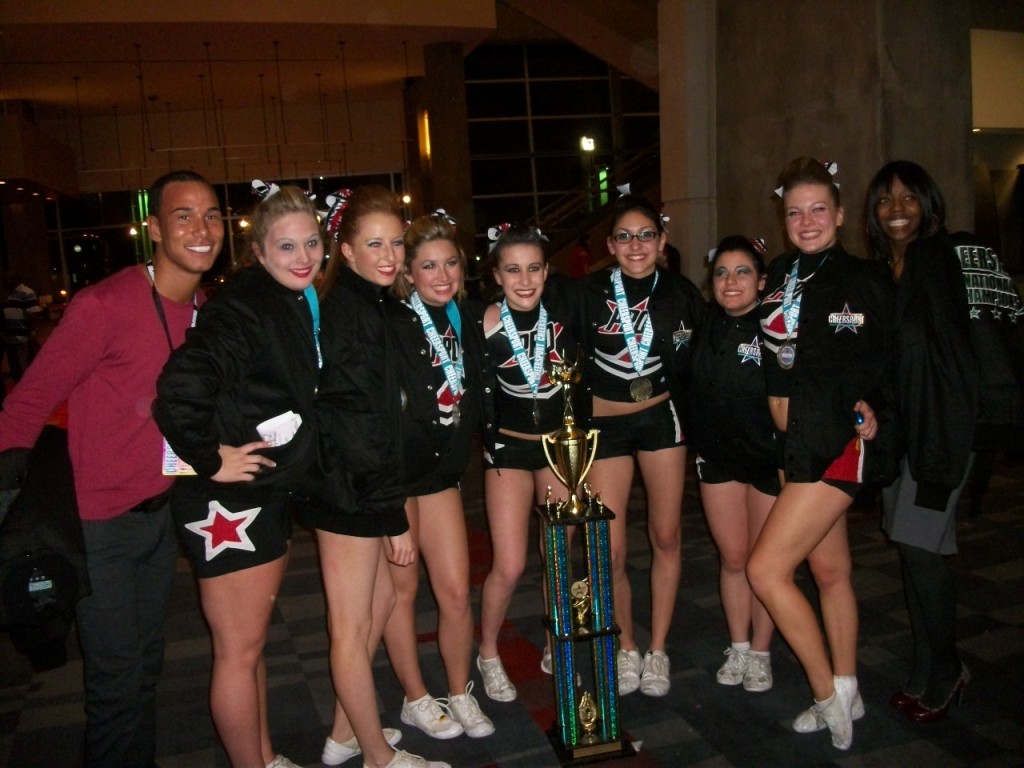 And something started to shift in the gym. They were the "Bad News Bears" of Allstars and soon other CHEERMaDs were rooting for them.
No longer relegated to the back line, Becky's perseverance paid off and she was given center position in the dance and was the only one standing at the end of the routine when all others collapsed to their knees. One coach told me she'd "rather have a team of 'Beckies' than one with a handful of advanced tumblers." Halfway through the season, the Senior Level 5 team started arriving extra early and stand at the end of the stage to cheer them on. One such Worlds' level Allstar was overheard to say, “I’d show up five hours early to watch Becky work that dance.” 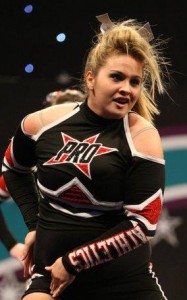 And work it they all did. All the way to earning their CHEERSPORT jackets and a reputation for being the team to beat throughout Nationals season. Confidence knows no level and thankfully for the sport of Allstars, the Level 1s, 2s and 3s know how to persevere.
Becky never did get a softball scholarship as her father always hoped, but she became a USASF certified coach and shared her love for the sport with a new generation of little ones. With the right preparation and decisions they make in the next five years, some might reach Level 5. But many may persevere and still never go beyond Level 2.
I hope they learn, it's not the level of difficulty but the level of joy they have that counts on the score sheet of life.
Reactions: Mom2Cheergirls and Lisa Seye
•••
Upvote 0

What Is More Important For Tryouts