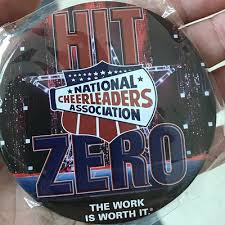 “Back in my day, if you fell, you lost.”
Sharon Taylor was watching the replay of NCA when she turned to her daughter, Jessicca Bugg, )below right) an All Star insider for more than 15-years and continued her thought: “I’m watching these divisions and I’m seeing teams falling and winning.” 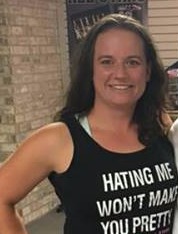 Jessica’s mom pretty much summed- up the thoughts of many this season.
While parents' (and coaches') concerns about discrepancies in scoring from competition to competition are nothing new, this season's coveted "Zero Club" or "You Hit!" buttons handed out in reward for a deduction-free routine has parents scratching their heads and talking (and much
more) on social media when teams do not win, some placing in the lower 25% of its divisions.
Granted, scoring has, and will continue to undergo changes (Did you know, as of this season, bobbles are no longer considered deduction-worthy? I didn't).
Iindustry leaders Melissa Hay, Nestor Dela Pena and Justin Carrier feel our pain. 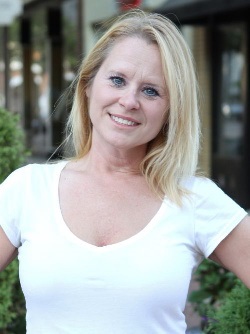 "The scoring process is complicated," Melissa said (photo below)."Just this past weekend at a competion in Puerto Rico, a parent came up to me and asked if I knew who won a division, and when I said 'No I don't, I'm only the buidling judge, I don't know the overall scores,' they looked at me with a really confused look on their face. Like, how could I be a judge and not know the score?"
In addition to being a judge of international competitions, Melissa's 23 years of cheerleading experience includes:15 years of college coaching; she's a 2004 Inductee to the Who’s Who of College Coaching; 2006 Finalist National Coach of the Year; 2010 Finalist SITA College Coach of the Year; 2011 Inductee College Cheer Coaching Hall of Fame; participated in the first STUNT Exhibition; coached first season College STUNT; AACCA Safety Certified; founder and owner of CheerXM1; Presenter at various National Coaches Conferences; and is published as an expert cheer source in national magazines.
In her most parent-friendly explanation, Melissa says every routine is scrutinized by a tumbling judge, building judge and overal judge which judge each area of expertise and score accordingly to the grid. There is also a legalities judge and safety judge.
Deductions come into play with the safety judge.
"A team with no deductions doesn't mean they recieve the highest score," Melissa says. "They may not have had enough difficulty in their routine or their technqiue, for what they performed was not clean enough to score in a higher range."
"With the choreography and coaching, you need a certain amount of difficulty to place in the higher range.
have enough difficulty preformed by the team to be in the high range," she continues.
Routines which score in the high range, at the same time have to be techincal with all skills and have very clean technique. The difficulty and technique scores are added together combined to get the overall combined skill score.
"What will happen is there is a routine that has zero falls, slow paced to make it a clean routine but not enough difficulty, compared to other teams," Melissa said. "Or take out difficulty; an elite or difficult skill to hit routine but lower the difficulty score. Not enough elements to score higher.
"So in that regard, teams are falling and winning." 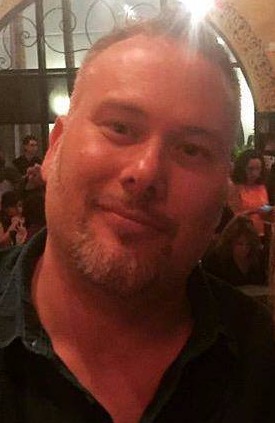 If you are looking for All Star royalty, you have to include Nestor Dela Pena. Nestor, and his Miami Elite teammates won the very first USASF Worlds in 2004 (and back-to-back titles winning again in 2005) in Large Coed Level 5. In the last 22 years, Nestor has been gym owner (Miami Elite) coach (Miami Elite, Elite Cheer, Broward Elite in Florida and Cheer Force in California), choreographer (20 years), 14 years as a National judge, multiple presenter at USASF National Conferences, is USASF Safety Certified in Levels 1-5, AACCA Safety Certified, a 2011 inductee into the USASF’s Who’s Who of All Star Cheer Coaches and in 2012, nominee for Small Gym of the Year/Inside Cheerleading Magazine.
Last year Nestor opened Allstar Cheer Consultants (Melissa Hay is also on staff with Allstar Cheer Consultants) which provides many services to gyms all around the country, including critiquing (pre-judging) routines by reviewing videos and on-site visits to help teams with technique and tweaking routines to be in the best “judgeability” as possible. It's his judge's eye that we are interested in for this article and Nestor was gracious with his time in this special Q&A:
CheerMAD: As a judge, what is the biggest surprise you’ve seen?
Nestor:There’s been a great leap in the level of competition this year compared to last year. It feels like everyone took a huge step-up in technique and creativity. The difference between teams is mostly in technique, everybody is doing the same skills, the cleaner ones are winning.
Having said that, my surprise is, teams are competing really difficult elements without mastering those elements, or not cleaning up the technique, and are still expecting to win.
CheerMAD:What would the Judge in you tell the coach in you to tell the athlete in you?
To never settle, and always work towards perfection. We may not be perfect, but at least we can try to be. By always pushing our personal limits.
Nestor:Take us back to being the first Worlds’ winning team (Miami Elite Large Coed Level 5 2004 & 2005 USASF Worlds Champion, what was special about that team?
That it's not a “Me” thing, it's a “We” thing. We ALL wanted it and worked for it relentlessly.
CheerMAD:What insight would you give parents, that you wish every parent knew or understood about cheer?
Nestor:The worst words, phrases in the world are “Would of,” “Could of,” “Should of” because they represent regret and remorse.
Don't let all those practices pass your kids by, when they do not give their 100% effort. Because come competition time, if their stunt falls or tumbling pass fails, then they will end up saying they “Would of hit that stunt,” “They Could Of hit that stunt, they Should of hit that stunt, if only they practiced harder and gave that 100% effort.
So let those coaches coach, and you and your kids will end up happy at the end of the season for it.
CheerMAD:We can't let you go without asking, what was it like to be a member of that first (and seconde) Large Coed Worlds Champion team?
Nestor:This may sound weird to say, but the biggest surprise I've had in all of this is, that I still have the close the bonds I have with those teammates. I say surprise because I never thought I'd still be so close to my team or teams from 20-plus years ago. So I'm very happy we all worked together for all those practices and that experience made us great friends till the end.
Also today, Varsity's "Potential Scoring Changes for the 2017-18 Season" webinar was hosted by Justin Carrier, VP Varsity All Star, Stephanie Ammirati, national director of scoring and judging, and Lark Wood of Fierce Connection was held with coaches and gym owners, as the industry considers how scoring can help athletes, coaches and parents.
“We want to create an industry that is safe and fun for athletes” Justin Carrier said in his opening remarks. “With the most number of athletes possible be in All Star cheer and routines easier and more fun.”
According to Carrier, the scoring committee, which had members also listening in on the webinar had spent this whole season discussing concerns and ideas for the “Best scoring possible.”
“These are ideas that have come out of concerns in the industry. We are not voting, these are all in the planning stages but want feedback (of gym owners and coaches).
“Nothing is final,” he stressed several times during the webinar.
Watch for a new Certifiably CheerMAD post with more details on potential scoring changes for 2017-18.
•••

CheerMaD said:
CheerMAD: What insight would you give parents, that you wish every parent knew or understood about cheer?

Nestor: The worst words, phrases in the world are “Would of,” “Could of,” “Should of” because they represent regret and remorse.
Don't let all those practices pass your kids by, when they do not give their 100% effort. Because come competition time, if their stunt falls or tumbling pass fails, then they will end up saying they “Would of hit that stunt,” “They Could Of hit that stunt, they Should of hit that stunt, if only they practiced harder and gave that 100% effort.
So let those coaches coach, and you and your kids will end up happy at the end of the season for it.
Click to expand...

The worst phrases in the world are "would of", "could of" and "should of" because they're not real worlds and grammatically incorrect. It's Would have "would've", could have "could've", and should have "should've".
Reactions: abbyandy9, Cheerfun2, MyGirlCheers and 9 others
•••