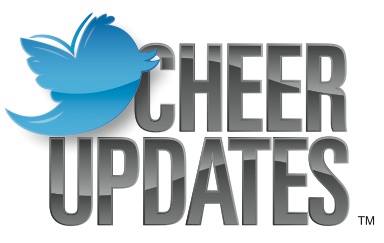 It’s hard to imagine now, but four years ago there was no such thing as cheerUPDATES.
Today is the four year anniversary of what started out as an opportunity for a coach to share his take on some big comp routines for his athletes back home. Four years later, it has become a window into immediate consumption, almost addiction, of cheer for the rest of us.
Well at least 1.7 billion of us who checked its Tweets last year.
1.7 Billion: as in the population of China.
“It’s really unfathomable how we got here especially when you consider it was created by accident for 50 kids at my gym,” said cheerUPDATES creator Doug Yeager, or DJ as he is known. 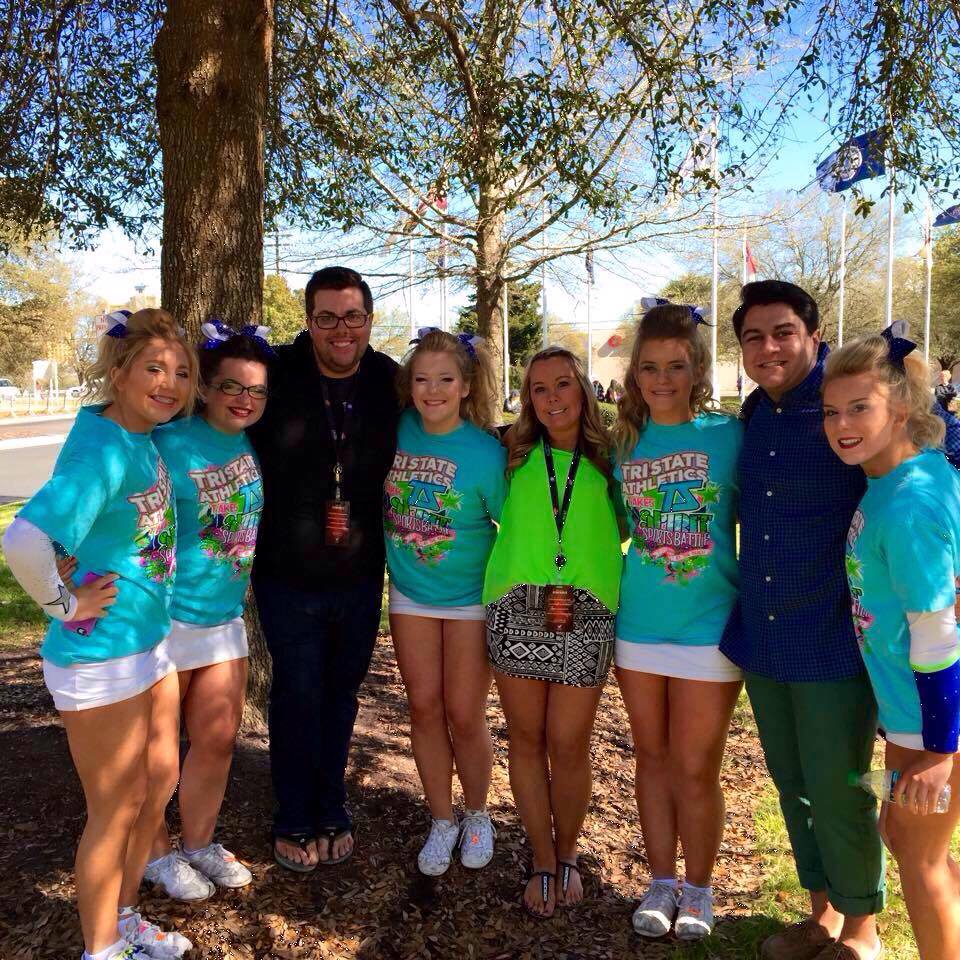 “Fifty turned into 100s and then it was born,” he said. “What it is today evolved without an operating plan. cheerUPDATES got bigger in an industry that got bigger.”
In addition to developing cheerUPDATES, DJ is also a coach at Tristate Athletics and industry judge. He makes a point to say he does not have a cell phone with him when he judges and does not Tweet at comps where he serves as a judge to avoid any perception of a conflict of interest.
If you’re unfamiliar, cheerUPDATES started out as a Twitter account in 2012 at The Majors.
“I don’t remember what the first Tweet actually was, but I know it was at that comp,” said DJ (seen in photo, third from left, in his capacity as Tristate Athletics coach).
The Majors was a new cheer concept itself: a “by invitation only” event in Indianapolis that featured some of the bigger gyms like Cheer Extreme Allstars and Cheer Athletics. Nine of the top teams in Senior Co-Ed and All-Girl competed. The winners in the All-Girl were Cheer Athletics Panthers and the Co-Ed winners were Cheer Extreme Senior Elite Co-Ed. (The 2016 Majors begins tomorrow; list of competitors is at the end of this post). 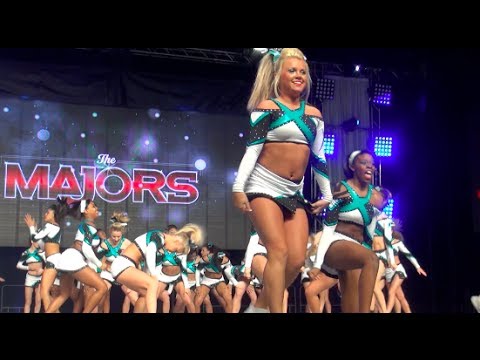 For those of us who couldn’t make it to Indianapolis, @cheerUPDATES gave us DJ’s take on the performance in his unique, sometimes “snarky” way. But his style only added to the Tweets’ authenticity. Anonymously, cheerUPDATES said what most people wanted but might be afraid to say. It’s charm was in its “Mean Girls” era Tweets.
"I really was surprised that there was any interest in my Tweets. I never saw the purpose in it,” he says.
In addition to commentary, cheerUPDATES gave a factual on-the-spot report of bobbles, falls and touch outs for level 5, Worlds teams.
Soon athletes and coaches were checking in to see how competing teams had faired.
“We reinvented how it could be used for cheerleading,” DJ said.
And then big industry leaders took notice.
“At the time we started it was seen as very stealth-like because no one knew where cheerUPDATES came from. Some even saw it as some kind of takeover,” DJ recalls. 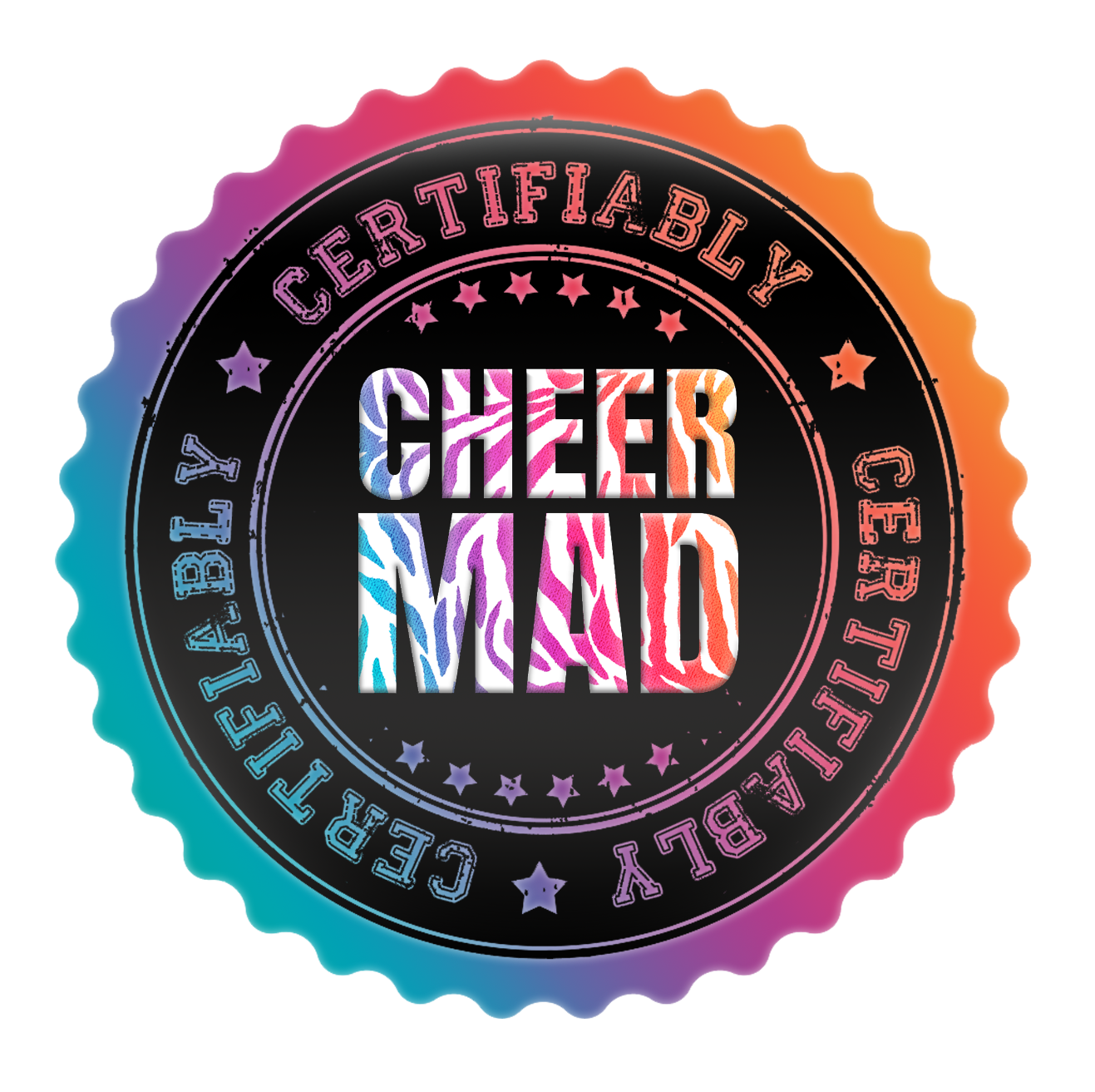 When I first met DJ it was in that anonymous phase. “Who was cheerUPDATES?” was a question on everyone’s mind because whomever it was, they were very knowledgeable about the industry and gave a true account of performances. Sometimes more honest than the scores at events might indicate.
In 2013 when I met DJ in a dark corner of a hotel lobby I was surprised to see the man behind the Tweeting. First of all, most people thought cheerUPDATES was a woman. It was fun to share the moment when cheerUPDATES hit “30,000” followers with DJ and ever since, I've felt like a proud "Aunt" watching his success.
“We went along for awhile, really not knowing what our purpose was,” said DJ, who because of a very small group of trusted friends was able to get reports from many competitions conducted at the same time. The effect made it seem like cheerUPDATES was everywhere. Those friends are still involved and DJ credits them with the success and growth of cheerUPDATES. The brand now includes cheerUPDATES2 which covers Levels 1-R5 and cheerMEDIA.
"cheerMEDIA is more of a stationary timeline," DJ explains. "We were finding that we were tweeting so much info that (photos and videos) were getting lost." cheerMEDIA is also on instagram.

DJ, with Cheer Extreme Allstar coach Kelly (Smith) Helton, at last year's Nfinity Champions League movie premier.
With growth, DJ recognizes, comes responsibility.
“We’ve dropped the commentary because we don’t want to put out anything for people to get their claws into,” he says.
But still, you can’t please everyone. He's had to defend the use of an exclamation point versus a Tweeted period.
“If you’ve won 15 Worlds, I expect you to hit so that warrants a period. But when the unexpected routine hits, that’s worthy of an exclamation point,” he explains. “Now it’s a rarity to see an exclamation point.”
Today, just about everyone knows about cheerUPDATES and last year DJ felt it had had outgrown its anonymity.
“Everything has to grow up. At first we could be more opinionated but now I put my name out there so people know who takes responsibility for it,” DJ said. “It’s scary and empowering at the same time.”

Cheer News Mar 3, 2021
Spirit Company
S
Upvote 1
C
College Does anyone else have ADHD and struggle with remembering cheers/chants/dances?