Secret To Getting From Level 1 To 5

Rachel, Angie and Abbi; 2010-11 Fierce Kidz of Proathletics, Mini Level 1
This TBT picture stopped me in my tracks. I looked at the picture of these babies: (left to right) my daughter Rachel, Angie and Abbi, and unexpectedly teared up.
I love these kids and their families, especially their moms (Angie’s is Kerri, Abbi’s is Leanne). I love our gym Proathletics, loved its owner and their coach, Jason Graham, when this picture was taken six years ago, as much as I do today
Jason might have choreographed the routine and told them where to place their body parts but these faces are all theirs. Their expressions reflected their personalities then and I can still see it in them today.
Rachel’s sassiness. Angie’s amazement. Abbi’s fierceness.
I also heard the words to Twenty One Pilots’ recent song playing in my head:
Wish we could turn back time, to the good ol' days,When our momma sang us to sleep but now we're stressed out.

Not quite turning back time, redoing it six years later: Rachel, Angie and Abbi, Showstoppers Level 5 Jr. Restricted 2015-16
Six years after the photo was taken, the girls' wonderful characteristics are still there, if not sometimes hidden by the roller coaster of feelings that come with adolescence and life experiences. The original picture captured a moment in time. But the pure joy, the feistiness and kind of fun that only comes from cheer, is still there in the picture above; they are the same kids at their core.
It's amazing to reflect on and reminisce (after my eyes cleared and the lump in my throat passed), especially about the amount of hours these kids have put in during the last six years to get from Level 1 to Level 5.

The first year they were together, Angie, Abbi and Rachel, were on Mini Level 1: Fierce Kidz for the 2010-11 season. The picture, left, was taken at their first comp during that first season the girls would cheer together; and they were just getting warmed up.
Abbi was Angie and Rachel’s flyer. You can see the confidence in her eyes: she KNOWS Angie and Rachel "got her back," as well as her feet and legs. You can see Angie's body language and Rachel's intense focus: indeed, they "got her."
Their team would be undefeated that year, many comps earning Level 1 Grand Champs, surpassing kids ten years older than themselves. They won CHEERSPORT their first year, something Rachel’s older sister would accomplish in her tenth year of cheer.
I remember saying to the other parents that season, Leanne and Kerri included, “This is not normal.” I came from the experience of being a cheer mom of an athlete whose team routinely placed second, third and fourth. It would take Becky four years to win her first National Champs sweatshirt. It was worn with pride for days and hung carefully or folded neatly when at home.
Rachel and her teammates earned many medals, backpacks, sweatshirts jackets that year which continues to this day. I am constantly picking articles of achievement up from the floor, thrown over a sofa or under a chair (but that’s another issue).
It wasn’t that it was "normal" or even as easy as they made it look, but these kids didn’t know that. They were talented, they were coached well, they loved to cheer and were natural competitors. We moms didn’t have to push them, they pushed themselves.

Many say cheer gyms are “Family” and ours is no different. While this saying is meant to be a testament to “love” and support associated with familial bonds, and it is, we tend to ignore the fact that most families are dysfunctional.
We fight with our siblings. We hate our parents. We talk behind each other’s backs. We bicker and b****. We gang up on each other. We put each other down. We fight and we play. We disagree and we gossip. We smile for the family picture at Thanksgiving even though we may not be speaking to each other for the rest of the year.
At times, come on we all know it, this is true for gyms, teams and teammates.
And like "real families" who make up, and let it go, teammates do to.
I’d consider Abbi, Rachel and Angie to be like sisters. They’ve grown up together. They’ve spent more time with each other than they do their “real families” never mind school, neighborhood and community friends. While they competed weekend after weekend, they missed sleepovers, birthday parties and many other functions.
Out of the gym they aren’t “besties” but they’ve experienced many of the “best” times of their lives together.
The dynamics of their “real” families, although not the same, are similar too. All three of us moms leave our daughters’ older brothers at home many weekends to travel the country’s cheer comps. One of my favorite sayings is “Comps are not vacations” but it’s hard to tell a ten year-old boy that when his sister is going to Hershey Park, flying in an airplane, eating in restaurants, staying in hotels and spending long weekends at Disney. 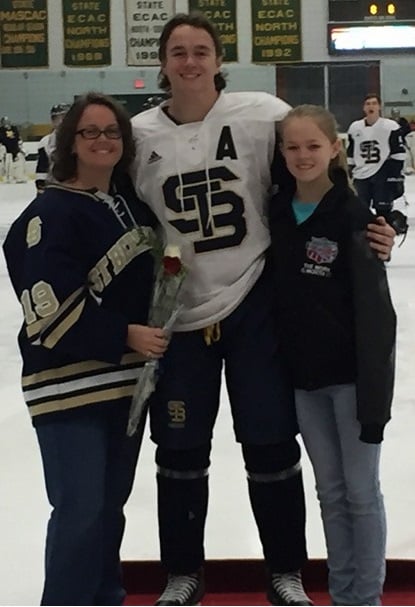 I know for a fact that Leanne and Kerri are consciously parenting, both on and off the mat, as do I. To make up for lost time with our sons (real or perceived) we miss some of our daughters’ local events, we are up early before work to get to our son’s hockey game or civic duty, we stay late at their performances on and off the field. We are doing our best. (Pictured left on the day after NCA this year, Leanne departed Dallas to get back home in time to attend son Joe's High School hockey team senior recognition day early the next morning).
Siblings are natural rivals too and cheer sisters, are no different. Through the years, “girls will be girls,” and middle school is the worst. Bodies change in adolescence, center of gravity rebalances, growth spurts effect tumbling skills and mood swings. But these experiences are daily in front of each other, wearing a sports bra and shorts that are the size of briefs, just as the age of "feeling conscious about self" kicks in (see Emotional changes that occur during puberty below).
As Minis Level 1, the six and seven year olds had school and cheer in their schedules and that's about it. As Level 5 athletes there's the added stress and time management of homework, tests, projects, friends, boys, and some serious physical and hormonal changes as the age of puberty kicks in. (Below are the “normal” emotional traits of puberty as defined by the Center for Adolescent Health). 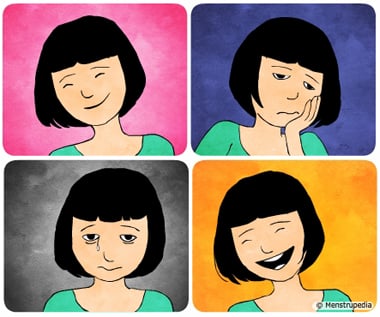 Emotional changes that occur during puberty
1. Feeling overly sensitive
2. Looking for an identity
3. Feeling uncertain
4. Peer pressure
5. Conflicting thoughts
6. Mood swings
7. Feeling conscious about self
References: Center for Adolescent Health
Social and emotional changes in adolescence, http://raisingchildren.net.au
Growing up is tough and when you are doing it with 20 or 30 other teammates, it’s hard to avoid constant internal comparison to each other, perceptions of who is “better” depending on position in the formation, pyramid or dance. Front row or back. It’s a silent statement many kids (and parents) take as a testament of how “good” they are when sometimes it’s just best for the next transition or overall look of the routine. 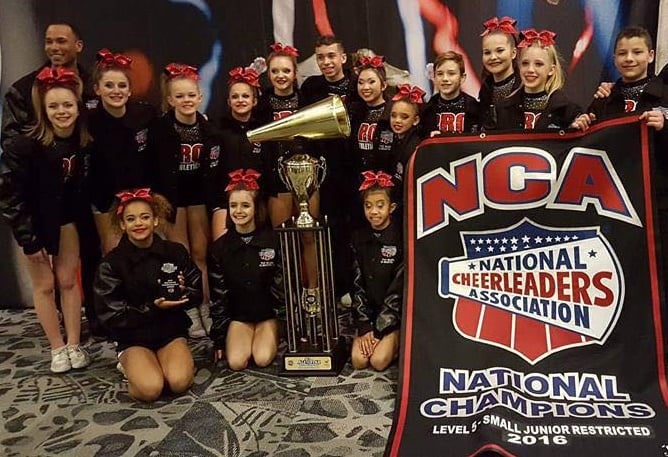 There are also the inevitable subconscious comparisons as progression of skill levels is a very individual achievement. Angie and Rachel, a year older than Abbi, aged off teams and moved to older divisions; Abbi’s flyer and tumbling skills advanced her to higher levels.
(Pictured Right: Proathletics' Showstoppers, 2016 Level 5, Junior Restricted NCA Champions)
You can’t spend as much time together as these kids do without an issue or two rearing its ugly head over the years. Some of them, we moms knew about immediately, some we learned about years later. But we always looked out for all the kids’ teammates and the kids knew if their mom wasn’t at the end of the stairs when they got off the mat, they could come to any of us and we’d wait with them. We have each others,’ and each others' daughters’ back. 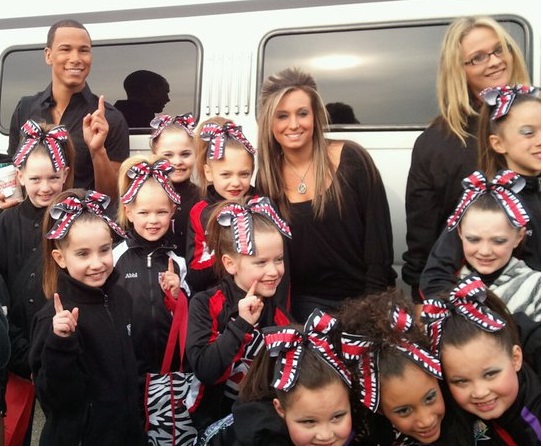 That first year, Fierce Kidz arrivedat their last competition in a limousine (left) paid for by their parents to make good on their coach’s promise should they win CHEERSPORT (they did). As Showstoppers this year, the last competition of the season wasn't as carefree now that the Summit is "Worlds-like" for Levels 1-R5
But as Fierce Kidz, it would be the last time for mock bribes as National titles would be expected of the athletes --not from coaches and parents but from themselves. When they aged off the team, Angie, Abbi and Rachel were on Showstoppers together. Then the real fun, highs and lows, started. There was the additional bond of “us against the world” as, now a Youth 2 team, they won week after week, and social media took notice of them. 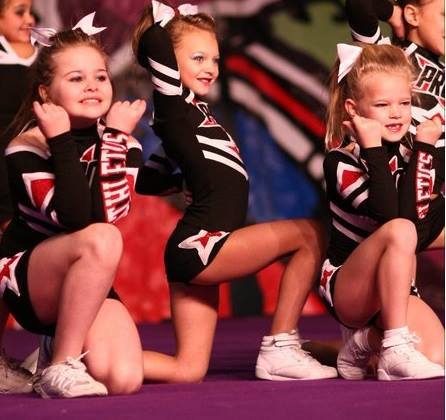 Rachel, Angie and Abbi, 2010-11 Proathletics' Fierce Kidz, Mini Level 1
As mini level 1 Fierce Kidz Rachel, Abbi and Angie made it all look so easy and there was a pure joy of cheer to back those routines up, as evidenced by that TBT picture (above). As Level 5, Jr. Restricted Showstoppers they still loved cheer but trained hard to make it look easy. Classes, clinics, privates and open tumbling have them in the gym five days a week, never mind competitions. Through the years Abbi, Rachel and Angie have won: All Levels Nfinity Cups; two CHEERSPORT jackets; three NCA jackets; and Summit rings together.They competed this year at the Summit for the third time, the first in this new Restricted 5 level and placed third. Abbi also competed at Worlds as a Sr. Level 5 Coed PROED , the first year that she became eligible. 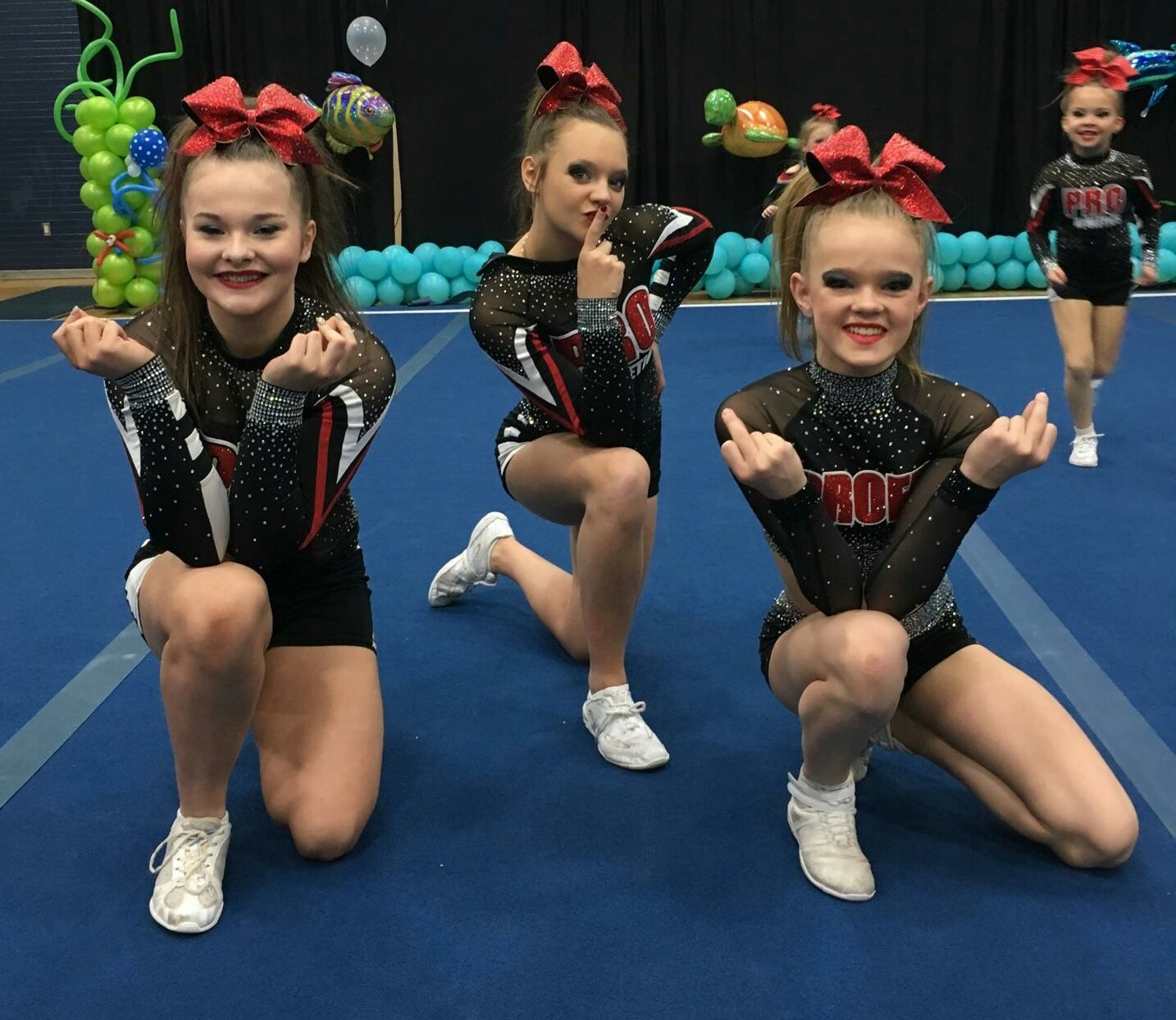 No longer the littlest kids in the gym, Rachel, Angie and Abbi have new "Fierce Kidz" like Amaya coming up from behind (at right}.
Recently, Kerri and I were talking about the way things have developed over the years. She hit it right on the head. 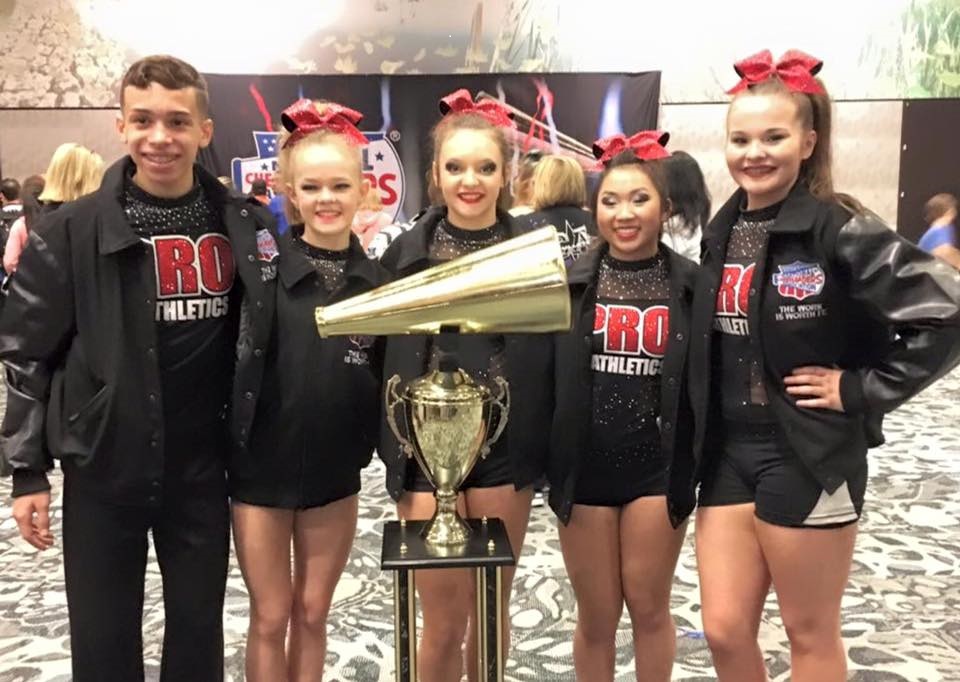 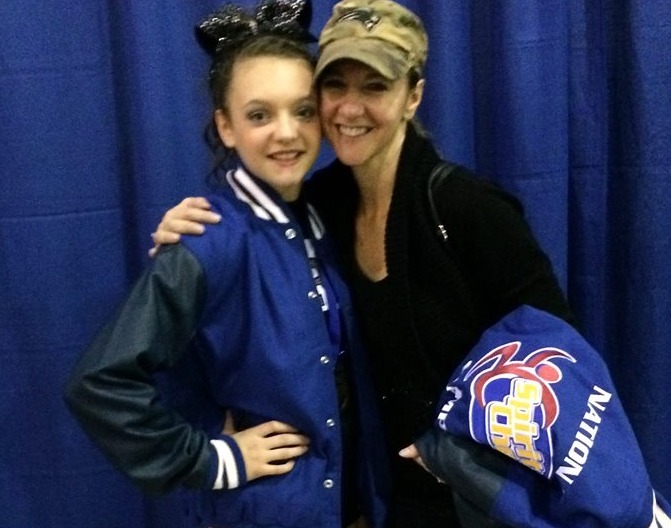 “Everyone is heading to high school(Abbi is changing schools but won't be going to high school) so big changes are ahead for all the athletes,” Kerri said (Pictured here with Angie).
“If PRO has done anything, it has given our children the strength and discipline to handle the changes they are all about to face.”
Our daughters' team placements for the 2016-17 season were last Sunday. Rachel and Angie moved to Level 5 Sr. Restricted Large Coed and Abbi will continue on PROED, the gym's Worlds team. Not every season is as carefree and fun like it was on Mini's but at these higher levels the pressure, discipline and commitment carries them much further. The payback comes at longer intervals after a lot of hard work is put in. But something keeps drawing them back, and us mothers are right there behind them. We’re all, mothers and daughters, doing our best. 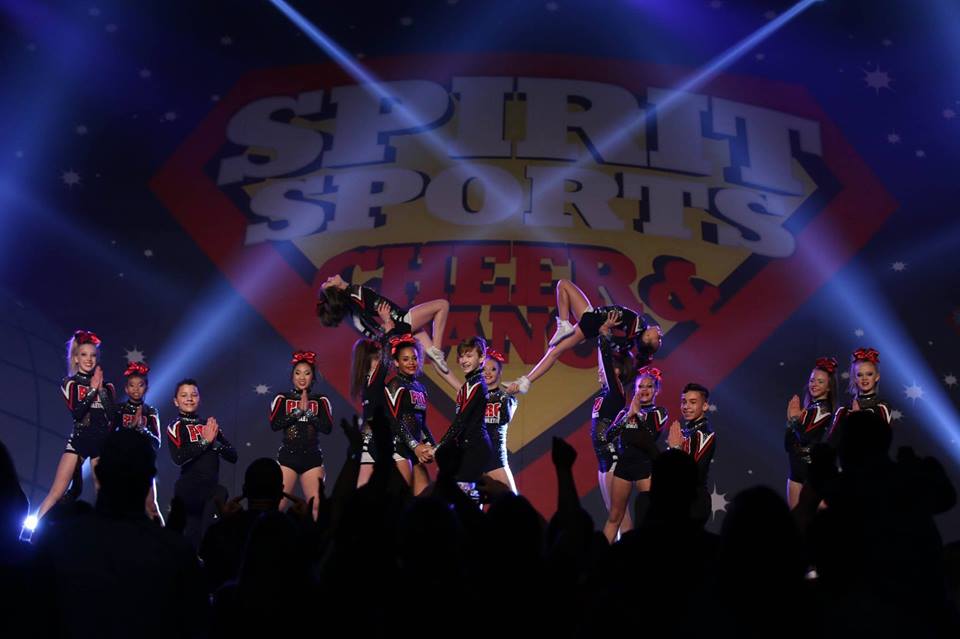 A
High School Help! As a parent, I want our school program to be more!

High School Cheerleading Apr 30, 2022
Anonymous
A
A
All-Star understanding the age gird and taking time off