Meet The Cheermad: The Chief

You are using an out of date browser. It may not display this or other websites correctly.
You should upgrade or use an alternative browser.
Parents... Coaches... Cheerleaders...
Cheer Questions?
Don't Lurk... We've Got Answers!

I've had the pleasure of being a Soccer Mom, Little League Mom, Football Mom, Softball Mom and Basketball Mom but none have been as endearing to me as being a Cheer Mom. While all youth sports parents are dedicated, loving and supportive, Cheer Moms and Dads are just a different kind of crazy.
Before CheerMAD, I was a cheer parent for eight years, most of them as "Team Mom" or volunteer of this or that committee at my oldest daughter's gym. I was working full time as a reporter for the New York Times' New England Media Group, managing a household, a marriage and the schedules of two other children who were in the above mentioned activities. To make sure they were getting equal "Mommy Time" (as if!) I'd share myself with my other kids by being an active Home Room Parent, Dance Mom, CYC Mom (Sunday School Teacher), Theater Mom and assistant Brownie and Cub Scout leader. 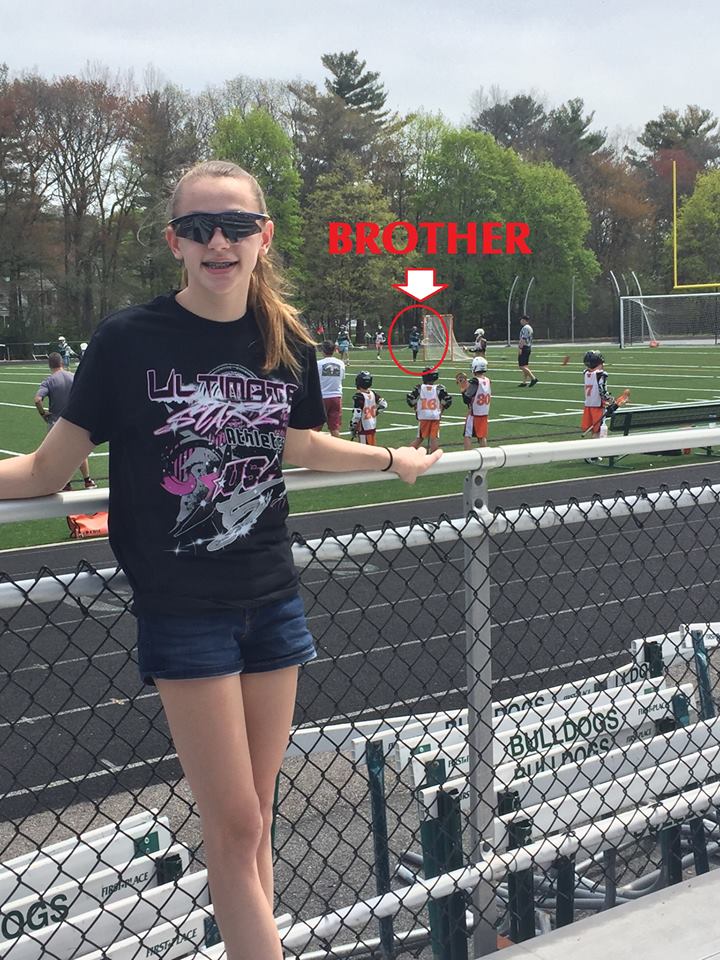 Back then, my reply to the typical greeting of "How are you?" was "I find sleep to be very overrated" or "It's a busy time of life."
Not to say, I have a lot of time now either.
Becky; the aforementioned Allstar packed away her National champion jackets, backpacks and medals several years ago (after winning her CHEERSPORT jacket as a Super Senior and NCA jacket as a coach at Pro Athletics in Massachusetts), is now working in the insurance industry but lives at home as independent as a 25-year old can.
No longer the athlete/thespian of his younger days, my son John is on the Dean's list as a junior in college.
PHOTO: While brother Matthew Harris plays lacrosse,Ultimate Starz Athletics' Mackenzie watches, which means their parents are doing double duty (at least!) in the youth sports department. Read more about how the Harris family manages by getting into the spirit of things, below. 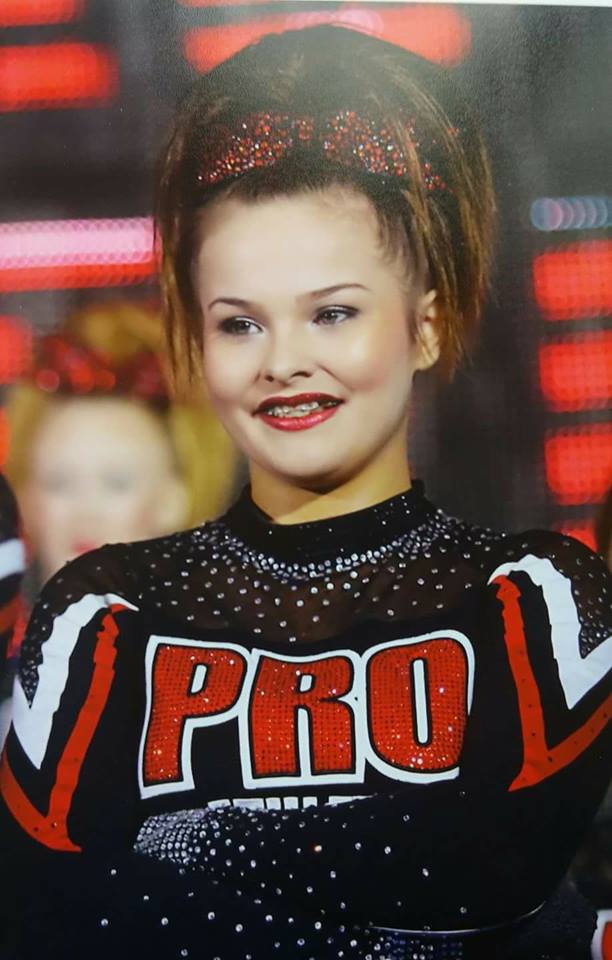 It's Rachel who keeps me CheerMAD for my 17th season.
In addition to practicing three days a week plus five hours on Saturday, there's school and the usual activities that go along with being a 15-year old teenage girl (RIGHT)
It looks like being CheerMAD is a lot of organizing, driving, paying, compensating and scheduling (and it is). But as I write this, I know it is no more than what most of of you are doing right now.
No, I'm no different than a dad who moved his family across country so his daughters could cheer at the gym of their dreams. Or a mom who juggles the activities of four children including one with very special medical issues. A mom of twin Allstars has double the amount of work for practices, classes, clinics and comps. A mom of four cheering on different teams. A foster mom of two children whose lives were turned around in part by their participation in Allstars.
These are just some of the great people I've met along the way. And lucky for us all, some of them have agreed to take their cheer parenting up a notch by being a member of the CheerMAD Parent Panel. I'm very proud to introduce each one of these great parents to you this season and show you why they are Certifiably CheerMAD. You don't know it but you've already benefited from this group of 33 cheer parents as they discuss trends in the industry in a private group, voice their likes and dislikes to me and have been contributing to CheerMAD's social media platforms since Worlds, Summit and D2.
What makes them Certifiably CheerMAD? Let's find out. 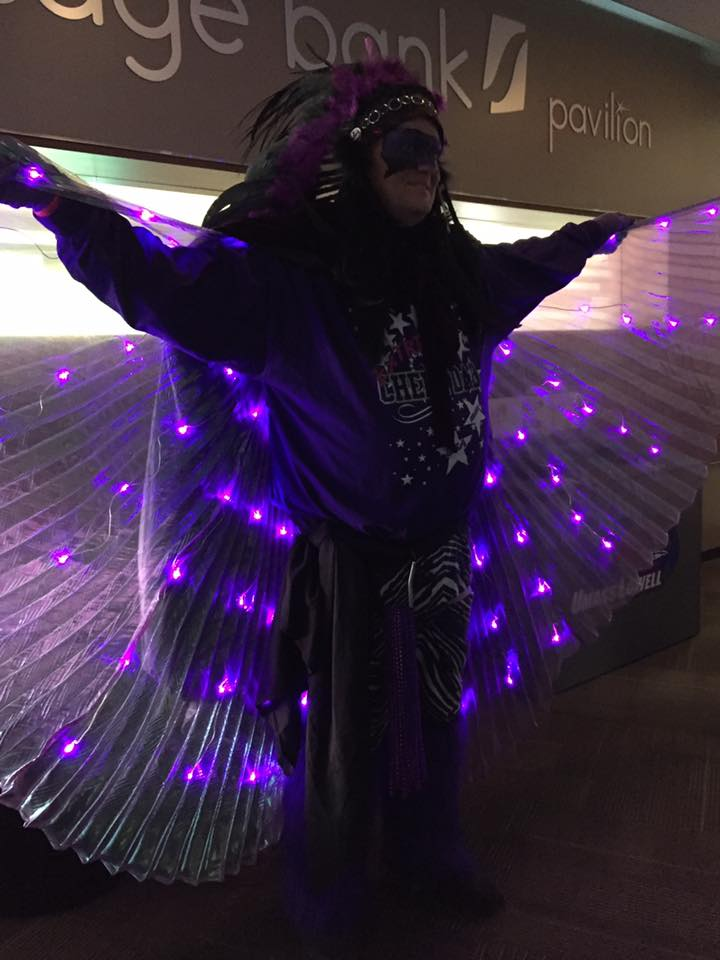 Since our daughters belong to gyms in Massachusetts, I first came into contact with Matt Harris at a comp several years ago. Once you've seen him, you'll never forget him. Matt is so CheerMAD, he has created an alter ego, if not cheer Super Hero: Big Chief Wannamak'emcheer.
The proud father of a double-teaming 14-year old at Ultimate Starz Athletics in Weymouth, Massachusetts, Matt explains "I started "Big Chief Wannamak'emcheer as a gag at first. Now it's grown bigger than I could have imagined." 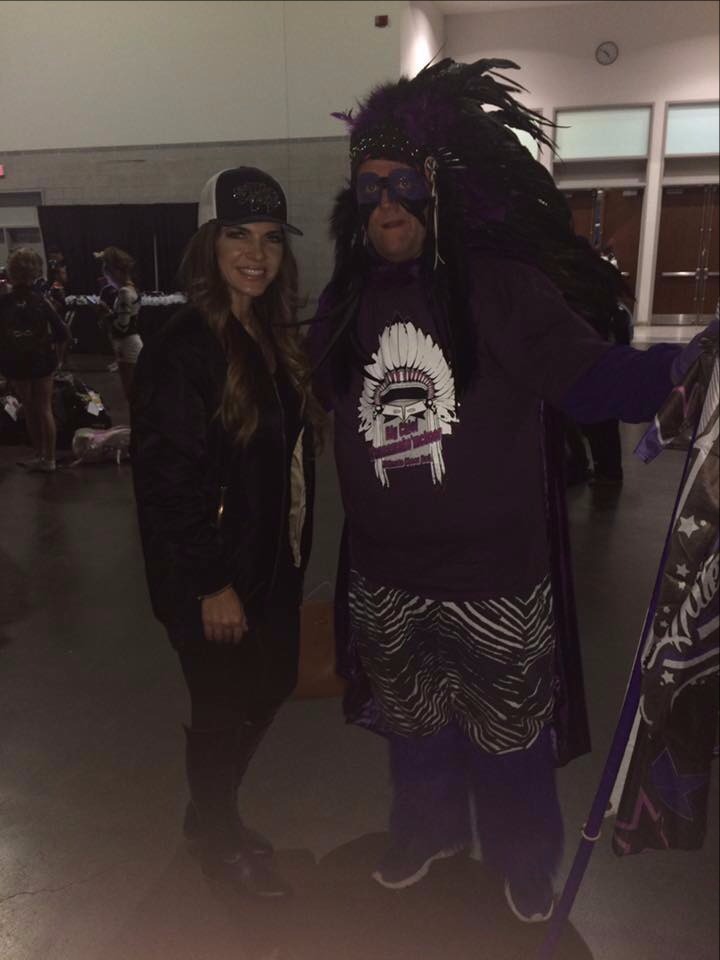 With his 10-year old son also gets in on the fun by also dressing in costume, Matt has appeared on TV, in the press several times while in character around the country and met celebrities like Teresa Guidice, of Bravo TV's The Real Housewives of New Jersey (left).
"There's no better way to get through 48-hours of a cheer comp (than as Chief Wannamak'emcheer)," Matt says. "Especially when my favorite cheerleader gives me a huge hug after she performs to say thank you for being me!"
Comp day with the Chief.
Here's an example of what a typical cheer weekend for Matt, of Chief Wannamak'emcheer, is like, in his own, er, Matt's words:
The alarm goes off at 6 AM, on a cold Saturday morning in March.
He begins to get his tired 46 year old frame out of bed, bone by bone. Knees and back sore beyond belief from too many hours on the ice, playing hockey.
But today, those knees seem to have a little more bounce in them. Is it because he has recently dropped a ton of weight? No, it’s because, this is cheer season and we’re in in full swing! He makes his way downstairs, and he can hear the moaning and fussing of his bride, Marie and his favorite 14 year-old double teaming cheerleader, as they have already been up a while preparing today’s version of teased out, super mega-hold sprayed hair, out in the kitchen.
As he walks in the kitchen, he encounters a thick hairspray fog, and thinks to himself, “This can’t be healthy.” With every other stroke of the brush, comes a high pitched complaint, which is quickly met with the often heard threat of: “We’re not gonna do this again next year!!”
Without even looking at him, the Bride says, “We need to be on the road by seven, So & So and her mom will be here at 6:55 because they are driving with us. We have to check in at 8:25, and we NEED to hit Dunks first. So if your gonna do your thing, you better get going.” 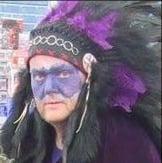 “My thing? This has become way bigger, than just my thing?” He thinks to himself while mockingly wiggling his head, but being careful not to utter a peep because he doesn’t want all of that hair rage coming down on him. He takes a deep breath and heads back through the ominous cloud of hairspray. “Phew”, he exhales and he made it out of the kitchen alive.
Time to head back upstairs to get his 10 year old sidekick out of bed. Before entering, he surveys the minefield that is his son’s bedroom, from the doorway, and thinks better of it.
“Dude, you painting up?” He says while still trying to stretch out his back.
A muffled “Yup” comes up from under the covers.
“Then let’s go.”
A few moments later, like Punxsutawney Phil, a buzzed cut, reddish-blonde head pops up from under those same covers.
“OK…. Let’s do this!” says the little lacrosse goalie, as he bounds from the mattress to the hallway and scrambles down the stairs.
Since the ladies have occupied the kitchen, the boys need to set up shop in the living room. The boy grabs a kitchen stool, while dad totes in an oversized zip-lock bag. In the bag, the tools of their new found seasonal trade: paint brushes, body paint, eye-liner markers, and glitter to name just a few. The boy already wearing a pair of black sweatpants, takes his position on the stool, as he pulls on his older sister’s black and purple cheer gym sweatshirt from last year’s season.
“Ready to go!" 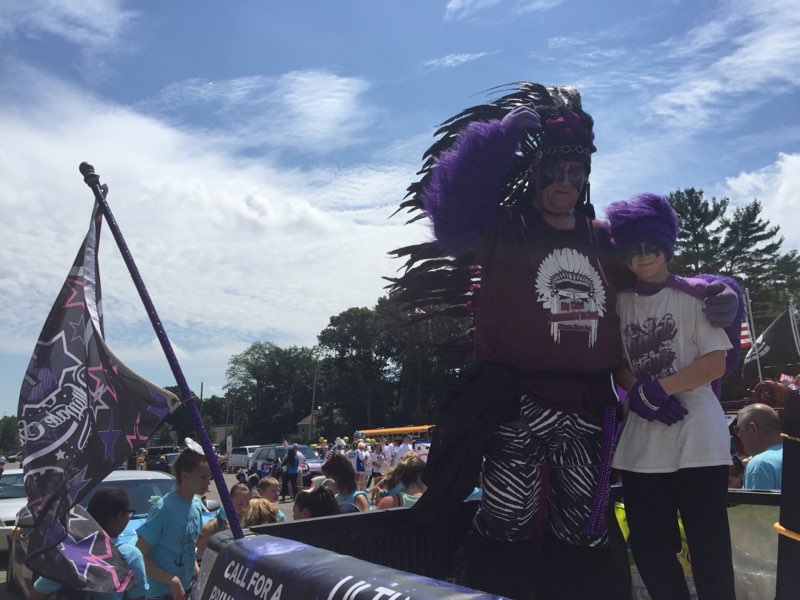 First task: A symmetrical outline needs to be applied with eyeliner. The intended look is a cross breed of Gene Simmons meets Ultimate Warrior kind of design. Not an easy task, because the boy’s nose twitches like a bunny every time you touch his face with the pencil. After four hundred and eighty-five “hold stills”, several sneezes, many squirms and giggles, the outline is finally done.
The purple and black body paint is next on the list of instructions. The globby colored piles are individually placed on their palette, which is actually a Tupperware lid, and placed in the microwave for 10 seconds.
“Is that safe?” asks the Bride.
“Who knows? It can’t be any worse than the fog that is going on in here,” Is the response, as he watches the globs shrink in to puddles.
The microwave’s timer bell rings, and as soon as the door opens, everyone gets a whiff of something that truly cannot be explained.
With an collective “Ugh”, he takes the lid and assumes his position in a tattered computer chair just in front of the boy on the stool.
“You ready?” He asks the boy.
“It’s all about sacrifice, Dad, paint me up!” 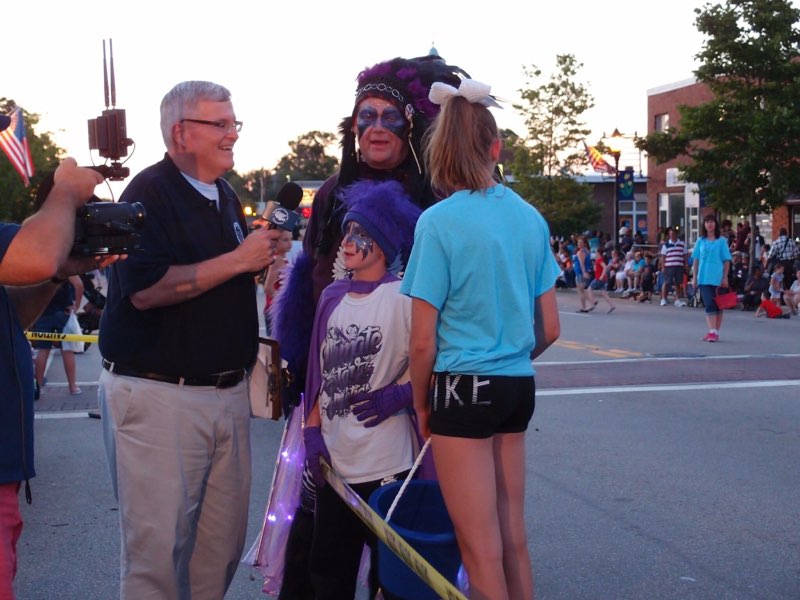 The Chief, Flash and Mackenzie as they are interviewed by local television
With that, the boy takes a deep breath knowing that the first touch of the bubbling paint has a bite to it, but by now, he is a veteran at this and knows that this is the only way the paint will go on smoothly and not clump up.
And you can’t make an impact like what they are planning to make, if you look clumpy.
For the next 10 minutes, like a tattoo artist, he positions the living canvas left and right, up and down, until all you see is the purple and black intended goal. Once the face painting is complete, the lad puts on his purple spikey hair, purple cape and gloves, an old black and white feather boa from a Halloween party K.I.S.S. costume 20 years prior, that is currently rapidly bleeding feathers, but adds to the look. He finishes it with a grey and black striped scarf tied around his waist. After about 20 minutes, he has transformed from normal 4th grade boy to “Flash: The Ultimate Cheer Brother!"
Now time to get working on the main attraction. Wearing a black turtleneck under a custom made purple long sleeve t-shirt that reads “Extreme Cheer Dad”, he heads in to the bathroom to utilize the three panel vanity mirror above the sink. With eyeliner pen in hand, he begins the outline. Superstitiously, he always does the right side first, then the left. The challenge is to get it as even as possible, since he has to do this without the aid of his newly prescribed glasses.
“Ah, outline done. Not too crooked”
With a whistle, Flash runs in with another lid loaded with bubbling globs of paint. The purple, angled band goes on around the eyes, then the black inward pointing arrows just below the band on the cheeks, finishing up with the black outline touched up. He shakes some glitter on Flash, and the youth returns the favor. Face painting is done.
Now time to finish gearing up. A peek at the clock, it’s 6:45.
To read more about this day in the life of Matt, lick here: Chief Wannamakeemcheer