Woodward made the decision to cut Cheer and Gymnastics from its offerings. I have to believe it's risk mitigation with everything that has been happening in both sports over the last few years.

Crazy! I went to Woodward West waaay back in the day and the staff was nothing but amazing and really helped me hone my skills and progression. Really unfortunate, but could be tied to this:

My cp attended and worked at Woodward in both the gymnastics and cheer programs from age 8 to age 21. Met many fantastic people there, Olympians, kids, and coaches. I'm so sorry to hear this.
•••

I buy my Insta followers

It may be due to the civil lawsuit (which is on the gymnastics side of the camp), but the press release is stating that all Woodward camps are now strictly focusing on ski/board/xtreme sports (two locations are official training centers for U.S. Ski and Snowboard). I never thought the mix of cheer, gymnastics, skate and bike made sense at Woodward.
The main coaches are now at a new camp called Nashcamp. I expect it will be a great alternative to Woodward and may even be better if it is solely focused on cheer.
Reactions: morganontheweekends and Cheers4frenchtoast
•••

I hate that this is happening, but if it helps get the pervs out of this sport and forces people in power to take this stuff more seriously, fine.
Reactions: Cheers4frenchtoast and cheermomforever
•••

I was wondering about this... gymnastics is gone too... here is the link to the post over at ChalkBucket... 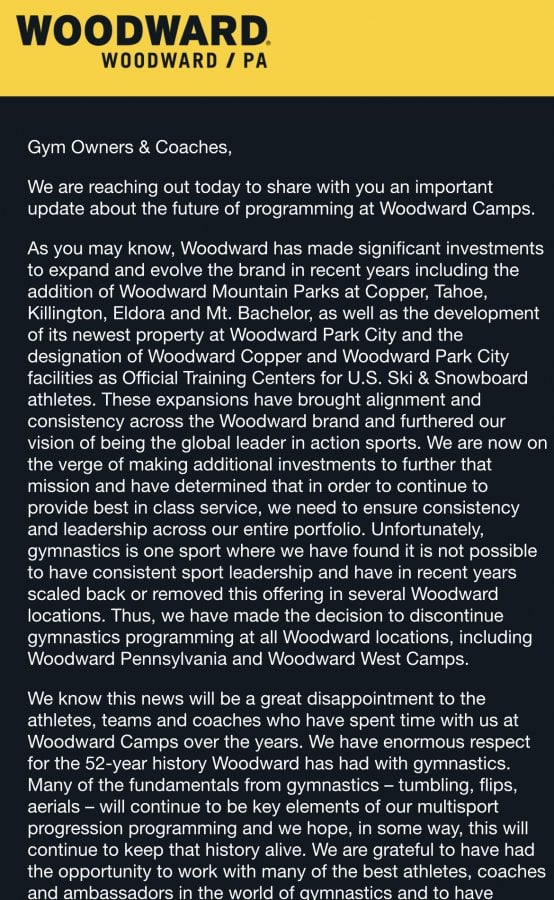 I got a lot of information from my girl yesterday. She says that the feeling has been out there for a few years, since Powdr took over, that things were moving in that direction.
•••

This doesn't surprise me, but also confuses me a bit. Cheer normally has about 300 campers in PA each week, and it seems more catered to the girls. West seems like it has a lot more boys. This is going to sound sexist and like I'm putting everything into a box, but the reality is that cheer/gym caters MOSTLY to females and skateboarding/BMX/scooter caters to MOSTLY males.
First, do they think PA will make up these numbers with extreme sports? I think you need to have something to cater to young females, and there are not enough in extreme sports. When I was at West, there were TONS of siblings and families attending and they loved that there was something for everyone.
Second, this is going to be even more weird if you have a huge camp of boys and one small cabin of girls that range in age from 7-17 just because there are so few of them. My daughter wants to go again for skateboarding, but that even seems like it will be a strange situation... There were only 5-6 on the extreme sports side both weeks we went.

I get it, but also I don't. I'm interested to see where this is going to go.
Reactions: Momager and Mndl
•••

According to my girl, the cheer program brought in more money than any of the other programs . She thinks Powdr is moving away from children's camps to "resorts" for extreme sports enthusiasts and families in PA.

If so, it sounds like a big change in business model. They must have done some research on it's potential before making this kind of move
Last edited: Oct 14, 2022
•••

Things such as #MeToo, USAG athletes coming forward, the current cheer situation are great for victims and provide a platform for them to come forward. The downside, however, is with awareness, the solution often becomes "I'd rather not deal with it" and people take an avenue they feel will have lower chance of incidence.

I hate to assume and have no idea if this is the reason, but there's no doubt "avoidance" often becomes the solution. Articles:

World Economic Forum: #MeToo having unexpected consequence...
Forbes: Why In the World Would Men Stop Mentoring Women....
USA Today: Will #MeToo turn into #NotHer
•••
You must log in or register to reply here.

A
All-Star Kicked off the team- who was in the wrong?